Time is Marching On

Just a few days more than three months from now, the stitching for MOB I will be finished, based on the deadline set out from the start.


When first envisioned, I thought that would be all there is to it -- but as those of you who've been following along know, the Project has taken legs (ahem)...so to speak -- and I've not waited till the last MOB I stitch is stitched to think about how and where and when the Project will make its debut in the wider world.


Seeing how poorly some of the stitches show on such a wide, white background, for instance, I've already determined that the finished MOB I will be shadow quilted a short way out from the image, then trimmed and mounted on a dark background, cut away in the back so that the stitching can be viewed from both sides.


Thanks to wonderful volunteers, MOB II: Making My Mark has been launched; I've received over a dozen finished squares and have about an equal number 'out there' that I hope to have in hand by the end of July so that the installation can be launched with a decent number of them.

I've decided this will be the participatory part of the installation, and am preparing a stack of 'kits' for participants to do at each venue where the Project is shown.  I'll include self-addressed envelopes (with stamps, in Canada) for those who want to take them home to finish and send to me.


And with two of my own now finished...


Since mid-April I've been working with a mentor (volunteer) provided as a service through Studio Art Quilt Associates (SAQA), the international studio quilt art group to which I've belonged for nearly a decade now.  She's been giving me insights into the process of preparing for an installation, including polishing the Project's back-story, creating proposal packages and the like.  I began by creating my own hard-copy folder: 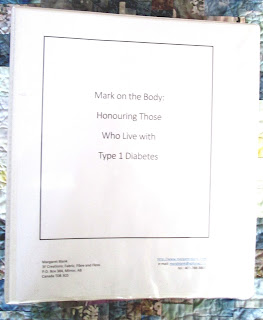 
I'm both excited and terrified!

For the first time ever, I'm linking this blog to Nina Marie's Off the Wall Friday.  See you next month!

Posted by Margaret at 1:39 PM No comments:

Email ThisBlogThis!Share to TwitterShare to FacebookShare to Pinterest
Labels: April 29-2016, Off the Wall Friday, preparing the installation

In Betwixt and Between

The first sock for MOB III is finished so I thought I'd share a photo: 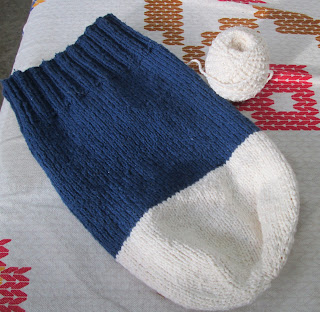 And the second, begun: 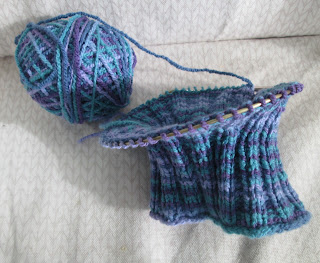 This one's going more quickly -- in part because the yarn is more interesting!  :-)

Thanks again to the volunteer knitters helping me with this.  You are all a blessing to me.  More at month-end.

Posted by Margaret at 7:51 AM No comments:

Mark on the Body: Preview The Book

Mark on the Body