As you who've been following know, hand-stitching on MOB I finished almost 3 weeks ago... 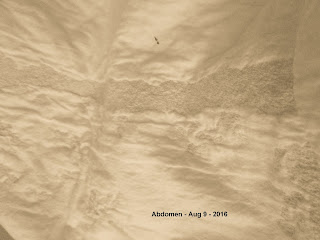 Since then, I sent my hard-working sewing machine off to the "spa" for long-needed TLC...and started in on the manuscript of the book that will accompany the installation.

The draft of the book has been reviewed by my mentor, and today was transferred to the self-publishing service, Blurb, for publication as a soft-cover trade book.

Permission has been procured to sell the book at the opening -- as well as afterwards -- and to divide net proceeds between the JDRF and the CDA, and a final planning meeting with the debut venue coordinators is forthcoming.  We are hoping that JDRF and CDA representatives will be able to attend.

The hosts of the exhibit are on track to produce posters and other publicity, while I will be creating postcards for distribution as well.

Now that my sewing machine is back, the finishing of MOB I and the parts to assemble MOB II will be completed shortly.

As for MOB III...eight of the stump socks are finished and stuffed... 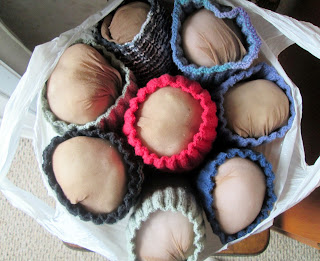 and the ninth is under construction.

I continue to thank you, Gentle Readers, for your support and patience as the process of developing this piece into an installation takes place.  Stay tuned!

Mark on the Body: Preview The Book

Mark on the Body